The Loss of the Derrycunihy
By Iain Sommerville

An engineering illustration of the M.V. Derrycunihy from the Burntisland Shipyard Journal.

During the Second World War, Burntisland Shipyard was working flat out and launching ships at an unprecedented rate. There were seven launches in 1943, and one of these was that of the Derrycunihy. She was a general purpose cargo ship of 10,200 tons, built for owners McCowen and Gross of London, and delivered to them in late February 1944. Although operated by her owners, she immediately came under the overall control of the Ministry of War Transport. Guns were fitted fore and aft, and she entered war service.

Three months later, on D-Day (6 June 1944), the first Allied troops landed on the beaches of Normandy. The follow-up invasion forces included 600 men of the 43rd Reconnaissance Regiment. They found themselves crammed into the Derrycunihy, anchored off Sword Beach awaiting the improvement in the weather which would allow them to be landed safely. Things looked good early on the morning of 24 June - it was a fine day, with a flat, calm sea. Captain Richardson weighed anchor and prepared to head for the landing point. Then disaster - the ship's movement triggered a German acoustic mine, which split the Derrycunihy in two. The forward section remained afloat, but the stern section, though still attached by the keel plates, sank within 20 seconds. To make matters worse, an ammunition truck on the ship exploded, igniting the spilled oil on the surface of the surrounding water.

Of the 600 men of the Regiment, 189 died and 150 were injured. Twenty-five of the crew, including a number of army gunners, also lost their lives. Most of the men who died had been trapped in the sunken stern section. It was the heaviest single British loss of life off the invasion beaches. The memorial page for Trooper Sidney Cole has a photo of the Derrycunihy, taken immediately after the explosion.

Paul Hannon, the archivist of the 43rd Reconnaissance Regiment Living History Group, visited Scotland in March 2006, to gather information for an exhibition in Bristol to commemorate the tragic events of 24 June 1944. Also planned was a memorial service off the Normandy coast at the spot where the stern section of the Derrycunihy still lies.

Of the men who survived, twenty-five regimental veterans and a number of the ship's crew were (at March 2006) still with us, and Paul hoped that some of them would be able to participate in the commemoration events. Two of the crew who survived the sinking came from Burntisland - Daniel Frew and Andrew Turner. Andrew died in 1995.

During his visit, Paul met one of the Scottish survivors, Walter Jamieson, who had been in number 5 hold of the Derrycunihy with his troop of A Squadron. Walter found himself underwater in the sinking stern. He could see light above him, which was actually the hatch of number 5 hold, minus its cover which had blown off. He was able to swim towards it and make his way out. He was one of the very few survivors from that hold.

Paul also spent a morning at Burntisland Heritage Centre during his visit. There he met and talked to three former shipyard employees - Tom Lawrence (who actually worked on the Derrycunihy, and remembered quite a lot about the ship), Johnston Wood and Alex Ferguson. Paul was then able to examine the large collection of shipyard material held in the Centre. He also visited the shipyard site, courtesy of Burntisland Fabrications. 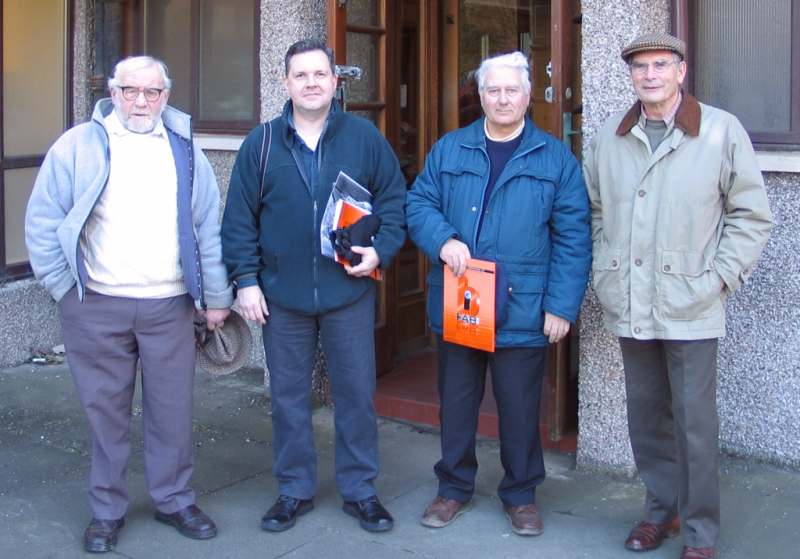 Three other McCowen and Gross vessels built in Burntisland were lost during the war. The Derrymore (launched in 1938) was torpedoed and sunk by a Japanese submarine in 1942 in the Java Sea. She was under the command of the same Captain Harold Richardson who later took charge of the Derrycunihy. The Derrynane (also launched in 1938) was blown up in 1941 by the German pocket battleship Admiral Hipper with the loss of all 35 crew and a gunner. The Derryheen (launched in 1941) was torpedoed and sunk by a German U-boat in 1942.

We are grateful to Paul Hannon for much of the material on which this article is based.